As Medicaid expansion dominates the headlines, the implementation of North Carolina’s historic Medicaid modernization effort is moving forward. It is vital that this important work continue regardless of what happens in the larger health care debate.

For years, North Carolina’s Medicaid program was plagued by costly overruns that sometimes ran into the hundreds of millions of dollars. Frequent shortfalls in the program threatened funding for roads, schools and other important priorities. So, in 2015 the General Assembly enacted sweeping Medicaid reform legislation that will transform the state’s Medicaid program from a costly fee-for-service model to a modern managed care approach that will provide budget predictability for taxpayers with greater choice and improved quality for Medicaid patients.

Under the new system, rather than the old fee-for-service model that pays doctors and hospitals separately for each service provided to Medicaid beneficiaries, the state will instead pay a fixed amount per patient to health plans to provide care to patients. The state’s cost remains fixed, regardless of how many times the Medicaid recipient visits the doctor. The managed care plan, rather than taxpayers, will be responsible for covering unexpected costs, allowing the State to budget for Medicaid spending and avoid unexpected shortfalls like those North Carolina had seen in the past. Health plans are also held accountable for the quality of health care outcomes and other performance measures, such as timely payment to providers. This gives health plans a strong incentive to focus on things that keep people well and make care more efficient.

North Carolina’s Medicaid reform was the product of more than three years of deliberations that carefully examined what has worked in other states. The result is a first-of-its-kind hybrid model that enables Medicaid beneficiaries to choose from health plans sponsored by groups of medical providers, like doctors and hospitals, as well as those offered by commercial managed care companies. Plans will compete to offer the best possible care at a predictable cost to the state. This competition will drive innovation that improves quality of care, efficiency and health outcomes.

The 39 other states that have successfully served Medicaid patients through managed care have shown that this approach can provide significant cost savings while improving health outcomes for Medicaid recipients. In Ohio, the state 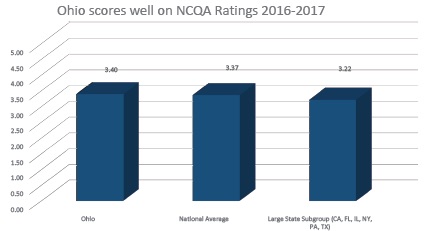 estimates that implementing managed care has saved $1 billion per year over what the cost would be if it had stuck with a fee-for-service model. From 2009 to 2013, Ohio slowed the growth of costs from 9 percent to 3 percent. Since 2013, Medicaid spending there has been relatively flat. Quality of health care provided, as measured by National Committee for Quality Assurance (NCQA) metrics, was higher than the national average and the average of large states for 2016-2017.

Other states’ experiences also indicate that Medicaid patients are consistently highly satisfied with their managed care plans, and that managed care plans perform as well or better than traditional fee-for-service models.

Preventive care and working with patients to proactively manage chronic conditions can reduce costly health problems down the road, and innovative use of technology can improve care coordination and avoid unnecessary duplication of expensive tests and procedures.

North Carolina’s new Medicaid program is an innovative approach unique to our state. But, in this as with many things, the devil is in the details. There are technical questions still to be worked out that will be crucial to ensuring that the new system all works as planned.

North Carolina’s health plans are committed to working with the state to ensure the successful implementation of sustainable, fiscally sound Medicaid reforms that protect our taxpayers and provide high-quality care to patients.